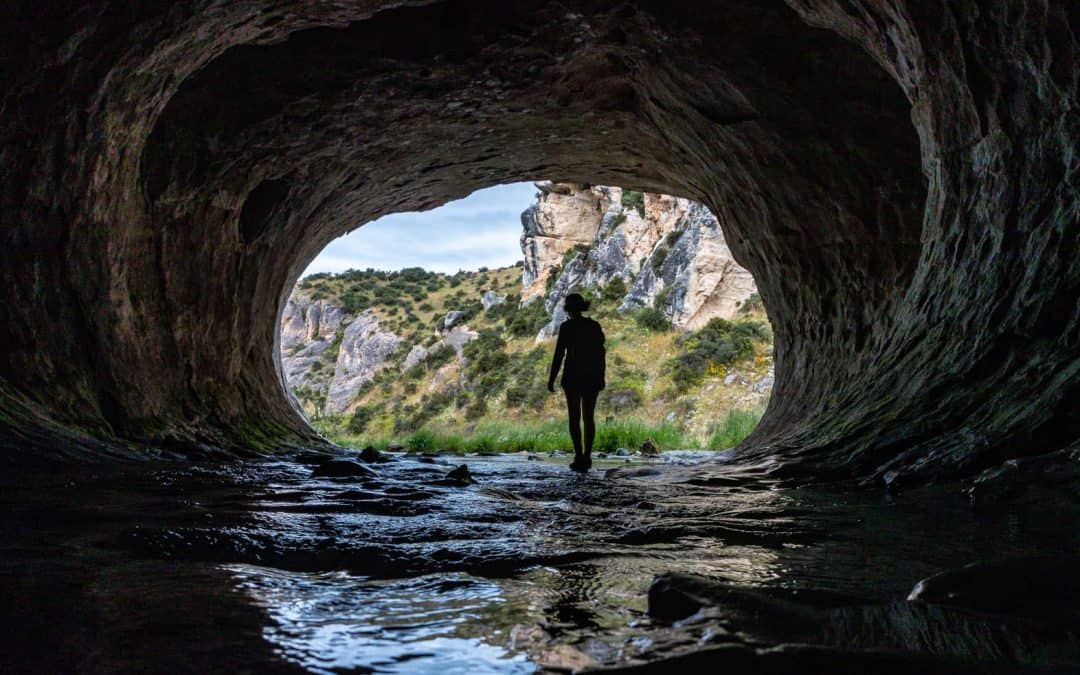 Never in a million years did I think one of my first adventures in New Zealand would be taking on a river flowing cave expedition but that’s precisely what happened.

Just an hour and a half outside of Christchurch is an awesome little adventure call The Cave Stream Scenic Reserve.

Many come here to hike along an accessible path and wander around the mouth of a giant gaping cave.

The more intrepid trek through the cave, and that’s what you’ll be doing soon as I assume that’s why you’re reading this! 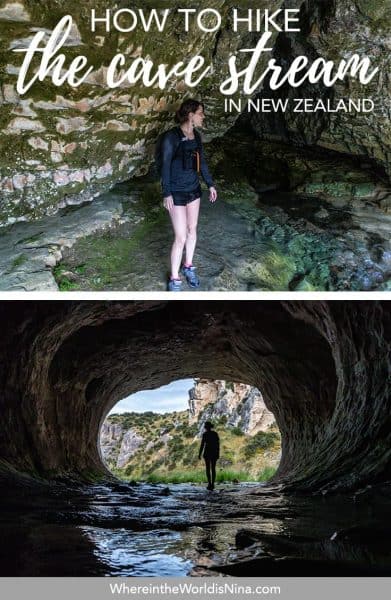 Starting at the cave mouth, we stood around not knowing what to do.

We came here to climb through, but I think we underestimated the dangers and seriousness of this adventure. We brought flip-flops, backpacks with our cameras, and a total of zero headlamps. Oops.

What did we think The Cave Stream Scenic Reserve would be like? Hello! “Cave” is a keyword here, why we didn’t bring appropriate lighting equipment is beyond me, but no worries, you’ll be more prepared than we were if you keep reading.

In the end, my good friend Jub and I took on the adventure, and Garrett stayed behind since he had a million dollars worth of camera equipment that he didn’t trust to leave in the car or hike through a cave with a river flowing through it. This was a smart choice.

Jub and I entered the cave, and immediately the water was up to our chests.

This was a bit scary since everyone said don’t go if it’s over your knees, but this part will be the deepest part of the whole trek. You’re fine!

As you move along through the cave with knee deep-ish water going against the stream, you’ll maneuver around boulders and rocks and few twists and turns and a few spots of gushing water, AKA mini waterfalls.

The waterfalls look so innocent as they are simply a few feet tall but don’t forget you’re going against the stream, so they are quite powerful! In fact, at one point Jub and I had to help each other over a waterfall since it was so incredibly powerful. It kept pushing us back down!

NOTE: ONLY go upstream don’t go with the flow of water. There are signs everywhere telling you to do this but there’s a good reason you should go against the flow of water, it’s easier and safer. Please listen to the signage and enter through the entrance only. 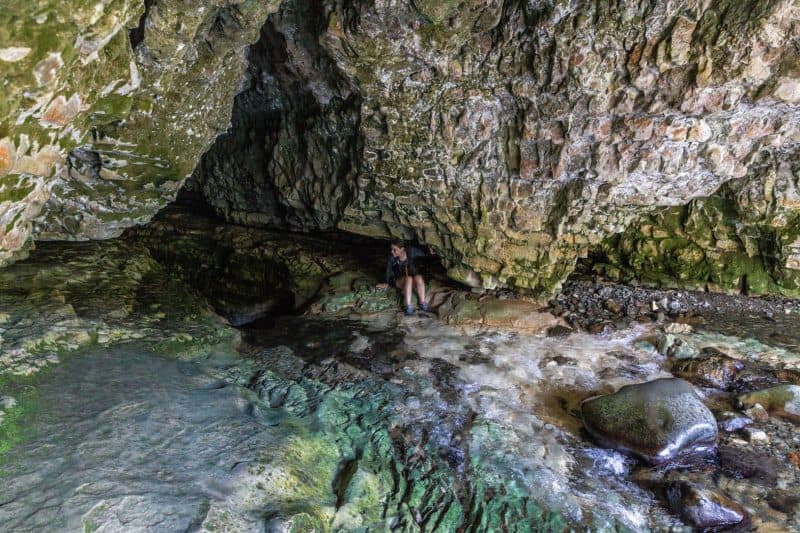 This is me sliding and crawling through the exit of the Cave Stream.

The entire time you’re walking through a narrow (at most, three people wide) slot canyon while gushing water flows beneath you.

I’ve been caving a few times, but nothing like this.

This cave is easy enough without a guide as it’s impossible to get lost, however, doing this yourself might be a bit hairy. Jub and I helped each other through a few times, and it was comforting to know someone else was with me. Going at it alone would have been scary AF.

After you make your way through the cave a bit more, you’ll see the light guiding you towards the end where there’s another trickling waterfall and then a raging one. Luckily, the raging waterfall means you’re done, and it’s time to climb out of the cave.

Metal bars guide you up and out of the canyon, and then you’ll need to scoot your butt along the edge of the cave, a pretty sketchy experience to say the least. Take your time!

All in all the Cave Stream Scenic Reserve was an epic trip and worth it!

Just make sure you are 10000% prepared as it’s not a place to fool around. It can be challenging, and you can end up in a dire situation if you don’t take proper precautions.

What Exactly Is the Cave Stream Scenic Reserve?

An epic adventure through a karst cave that’s about half a kilometer long filled with mini waterfalls that flow through narrow crevices and slots of the cave.

The cave is loud due to the water flowing, and the cave itself is quite tall showing off its years and years of water chipping away at the limestone to create this magnificent channel!

What to Wear in the Cave Stream Scenic Reserve

December through April is summer time and although the water can still be cold, it’s certainly tolerable.

I went in January and I wore:

I would NOT recommend wearing a swimsuit only or flip-flops.

Jub wore flip-flops and he survived but I can tell you it will make your life 10 times easier with actual closed toed shoes. He did have to hold his flip-flops a few times to make it over certain waterfalls so they didn’t float away as well.

If you’re going from June to August, the water will be extremely cold and I’ve read that individuals who wore their wetsuits were still quite cold. This is something to keep in mind.

RELATED: Guide to the Routeburn Track: Should You Do It as a Day Hike? (New Zealand)

What to Bring to Climb Through the Cave Stream

Literally only a light!

We didn’t come as prepared as we should have for this hike, I can tell you that. I had a backpack on as it was “holding” my light. Which actually came in handy! However, I had emptied everything out of my bag that was important (i.e. camera!)

Jub brought his phone and used it as a torch. I DON’T recommend this! I’m actually super surprised that his phone made it in the end. At one point I had to hold his phone and flip flops for him so he could push himself up and over a waterfall.

Lesson: Don’t do what Jub did. Although Jub is a local and the raddest person ever, when it comes to tips for hiking the Cave Stream, Jub is the worst. 🙂

It’s most recommended to bring a headlamp and a back up light or batteries. Having one would have been super helpful.

Since I had my torch attached to my bag and on my chest, this was actually the next best thing since we didn’t have a headlamp. I also had an emergency light I rigged on my backpack strap. 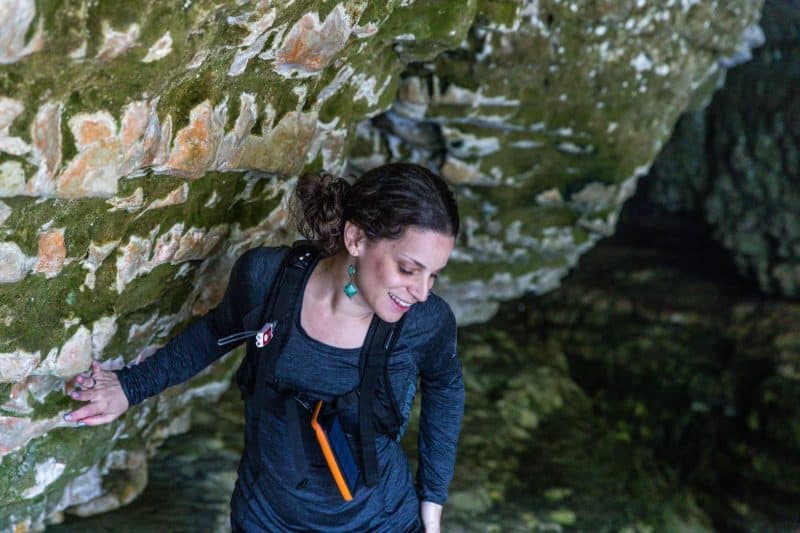 This orange solar charger I carry everywhere also has a torch feature and that white thing on my strap was my back up light. I rigged my torch on my backpack which left me handsfree and was almost as good a headtorch!

It’s a light that you have to hold the button down for the light to work but it was a backup light, better than no light!

Here’s my solar charger and torch that recommended a day in and day out.

I LOVE this thing to charge my stuff and now, the integrated torch came in clutch.

I literally wouldn’t have been able to go without it. BUT while it’s a rugged piece of equipment, I did get it wet, which isn’t good. Luckily, it survived!

Again, I don’t recommend to do what we did. Bring a headlamp, which, if you’re traveling in New Zealand, may be a good idea to have for camping, campervanning, and caving some more anyway.

When you go through this cave, there is no going through without a decent light, I can’t stress this enough.

If you don’t have a light going through the Cave Stream, you may not get out. This is a CAVE. As in, it’s totally pitch black.

You don’t need water or food or even a camera. It’s so dark, I didn’t even attempt to take pictures inside hence the reason why this post is thin on photos!

RELATED: 11 Things to Do in the Catlins in 2 Days (New Zealand)

When to Go to The Cave Stream Scenic Reserve

Summer time will be the best time to go as the water is more tolerable. I went in Januruary, I was actually comfortable in shorts and a base layer top. The water is cold when you first get in but your body gets used to it very quickly.

When I went, I wasn’t uncomfortable or cold at any point.

If you decide to go in the winter months, take extra precautions. A thick wetsuit would likely be needed as it’s mentioned in a few other sites and at the entrance of the cave. If there’s snow on the mountains around you, it’s going to be freezing.

During the winter, the water levels could also be higher because of the run off water from mountains. This can be extremely dangerous!

When you enter the cave, the water levels will be about chest high but it shouldn’t be any higher than your knees or so as you make your way through the cave. If the water levels are higher, the water is obscure, or even foamy, turn around and don’t climb through.

Definitely don’t climb through the cave if it’s raining! 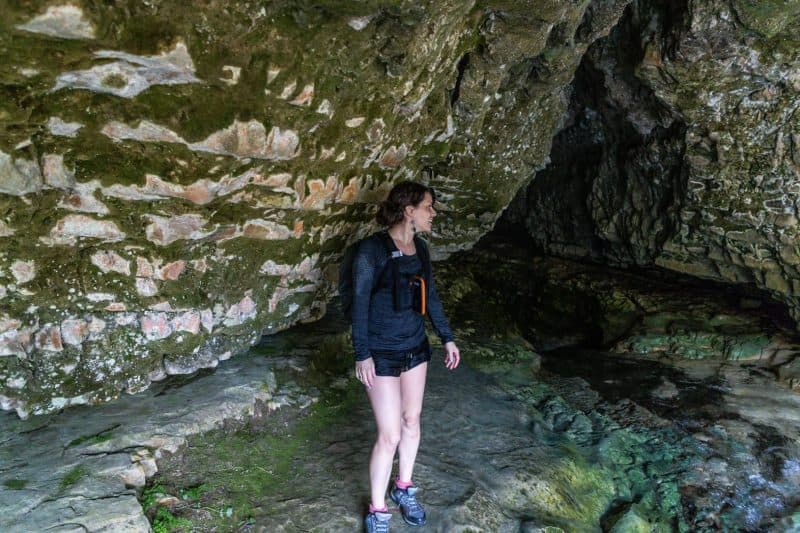 Just finished trekking through the Cave Stream and you couldn’t wipe the smile off my face. It was so fun!

Surprisingly, when we got here on a Friday afternoon around 5ish, not another soul was going through this cave. We saw a few people around doing the hike around the cave but no one else inside. I’ve read it can get very busy, which honestly, would have ruined the experience for us.

It may be a good idea to either get there early in the day or later in the day as I assume the afternoon would be most crowded.

My last warning, seriously be careful. People have died here and after having done this trek, in great conditions and only semi-prepared, I can see how this trek can go south and get very dangerous very quickly.

RELATED: 11 Fab Things to Do in the Coromandel, New Zealand 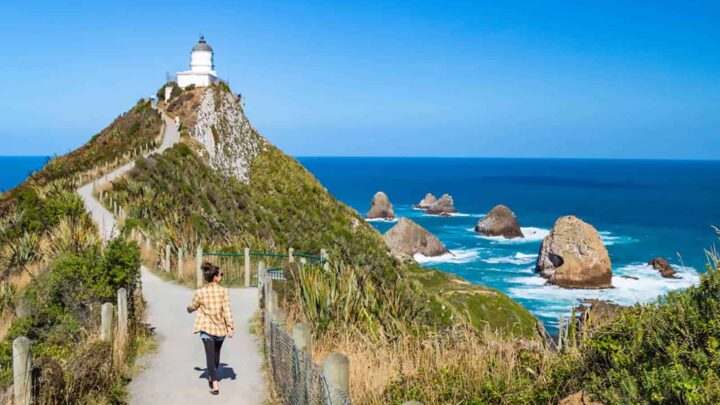 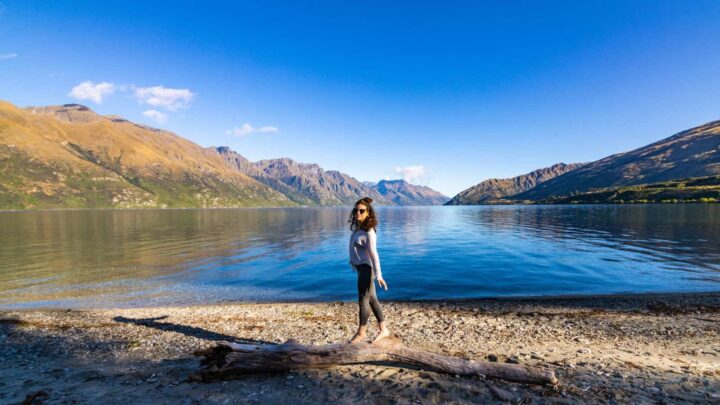 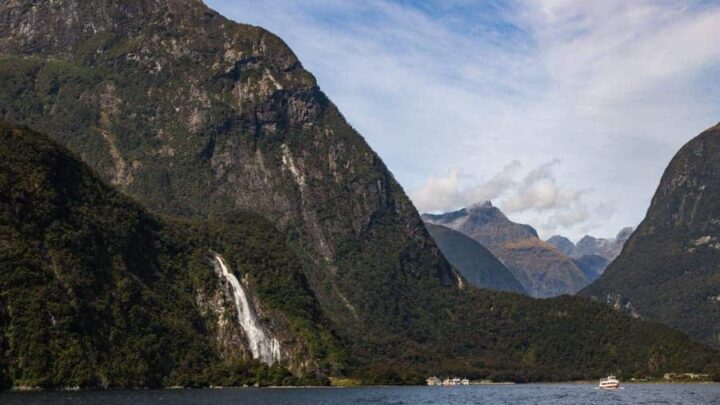 5 Things to Know about Milford Sound, How to See It and Is It Worth It? (New Zealand) 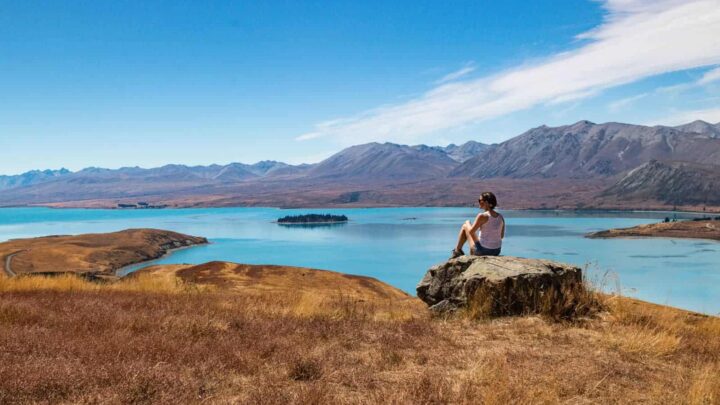 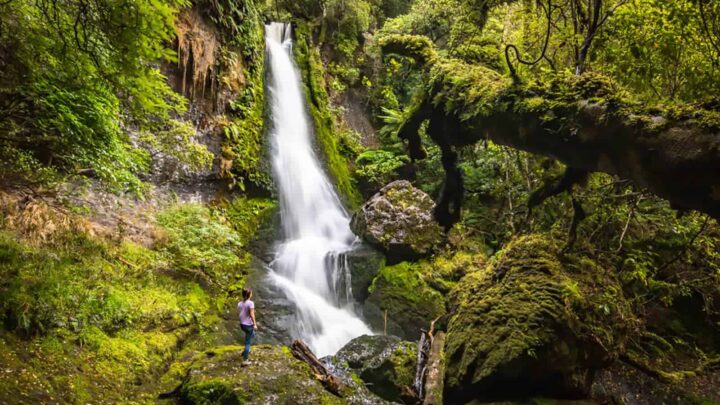 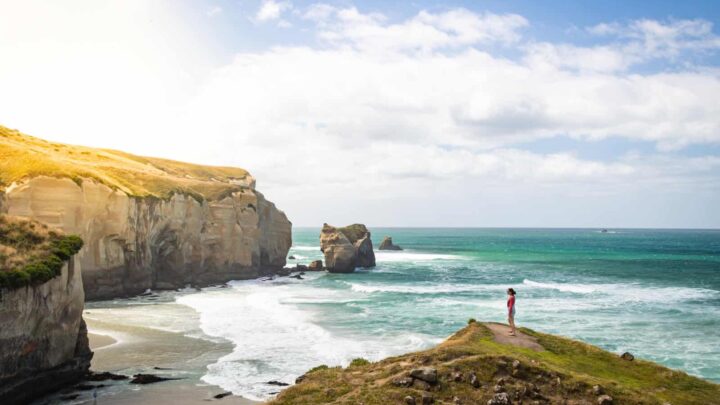 So are you planning to hike The Cave Stream in New Zealand? Let us know in the comments!

>>> EVEN MORE ABOUT TRAVELING NEW ZEALAND <<<

50+ of the Best Hikes in New Zealand & Hiking Tips

11 Fab Things to Do in The Coromandel, New Zealand

Epic Things to Do in Rotorua—Hot Pools & Adventures

7 Tips For The Cathedral Cove Walk in The Coromandel, New Zealand

A Guide to Hiking The Kepler Track in Fiordland National Park, New Zealand

Guide to the Routeburn Track: Should You Do It as a Day Hike? (New Zealand) 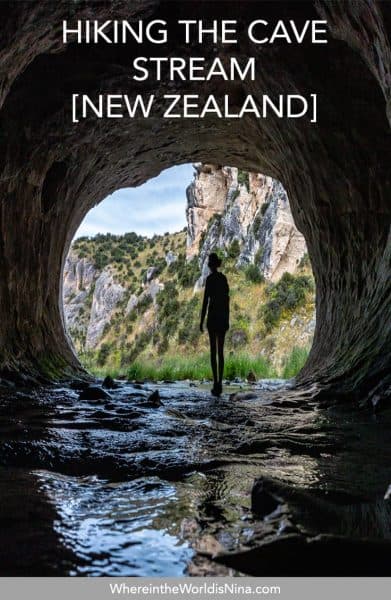