I saw it. Finally! It was peeking out from just over the last hump in the ridgeline, I saw the bright red roof.

It was the toilet.

I wanted to collapse right there and cry tears of joy!

I did it. I finally made it!

Seeing the little red toilet when I did saved me. Just moments before I was ready to give up, I was exhausted, hurting all over, my legs didn’t want to move one in the front of the other.

My hands were dirty, grime was wedged under my nails, my sunscreen had sweated off my face and I was turning red, I could feel my skin tightening.

My shoulders no longer wanted my pack on it; my feet were aching, I wanted this hike to be DONE wth.

When I finally saw that toilet, I was just moments away from screaming on the mountain top in frustration. I knew I took much longer to do this portion of the hike. The last hour was a struggle, and I was annoyed with myself. I wanted to be better, but I nearly gave up.

Funny enough, after I saw the toilet, all my pain, worries, and panic melted away.

I didn’t even go inside the hut to put myself down before I started taking pictures of the hut and that toilet with the best view in the world. I was smiling ear to ear and totally forgot about the arduous hike I just completed.

If you’re thinking of tackling the French Ridge Hut hike in Aspiring National Park, here’s everything you need to know before you go.

A Guide to Hiking to French Ridge Hut

I randomly stumbled upon French Ridge Hut while looking at huts to stay in South Island.

As soon as I saw the adorable red hut with a single, bright red bathroom perched on a mountain top with the most exceptional view ever, I wanted to hike it. I was on a kick for staying in huts now after my hike to Mueller Hut just a week ago!

I looked into the hike a bit, decided we were fit enough, and that was about it.

Pretty pictures and a decent level of fitness—I’m there!

There’s so much more to know about this hike though, so I hope this comprehensive guide to hiking to French Ridge Hut helps you tackle it better and be more prepared!

This hike is deceptively difficult, and its challenging parts are at the very end after you’ve depleted a lot of your energy.

I would NOT try this hike if you don’t have a decent level of fitness. I consider myself decent-ish… And it was hard on the way there.

The Hike to Aspiring Hut

You’re going to hike to Aspiring Hut first, and it will be a welcomed relief from the sun. So far, your hike to the hut was about 9km (5.5 miles), and you’ve encountered a few stream crossings but nothing that will get your shoes soaked (unless you suck at hopping from rock to rock).

There has been zero shade and you’ve been roasting in the valley the entire way so far.

Your only saving grace? The trail so far was pretty much flat. Apply sunscreen again while you’re here, take a rest, and a snack a bit.

The flats are luckily… FLAT.

Again, this is why this hike is so deceptive in its difficulty, up until now; you’re only sweating because it’s hot out. This flat walk is mostly exposed although you’ll have a few moments of relief when you get a tree canopy to walk through — a few ups and downs along the river and a few bridges.

At the very end, just before you begin your ascent to French Ridge Hut, you’ll need to cross a river. And not a rock hopping river… A real river crossing.

I suggest taking off your shoes to get across the river and to ONLY cross where the sign says to cross. We checked, this is the safest spot. The other areas are deceptively deep, and this is the most shallow area to cross.

The water got up to my knees, and the water moves fast. Be careful not to step anywhere too deep.

Despite it being summer, the water was so cold; I was literally in pain. It stung bad and breathing in, and out quickly and loudly was apparently my way of dealing with this. Good to know I’d never survive if I fell in an icy lake!

After thawing out a bit on the other side and getting my shoes back on, this is where the French Ridge hike really begins.

Yep, about 14km (8.5 miles) into the hike is when you’re finally “getting started,” after you’ve been baking in the sun and walking all day… I was already a bit tired but also ready for this!

The Rock and Tree Scramble

This is the craziest part of the whole trek. immediately, you are greeted with a vast mountain, and you’re about to go straight up. Literally.

You’ll be using your entire body for this part of the hike.

For the next two hours, you’ll be grabbing on to tree branches and rocks to hoist yourself up this mountain. At some points, you will be literally rock climbing a few feet up with no ropes. Slip and fall here, and you’ll be injured. So… don’t.

You’ll be putting your life in the hands (?) of tree roots and boulders. Your ascent is steep and challenging. Your only relief this time is that you’re under trees and shaded.

This part is dangerous, and it’s not advisable for just anyone to do. take your time and be careful.

I thought the challenging part was the tree and rock scramble and then I got to the ridge… Nobody told me the ridgeline would take another hour. In my head, after the forest part, I figured I’d pretty much be there.

This is the part where I wanted to die. My energy was completely depleted. I barely had an ounce of oomph left in me, and I genuinely think it was because I didn’t realize there was still about an hour to go.

The worst part? We’re walking the ridgeline of a mountain, and were fully exposed again.

This part isn’t that challenging although you are still going up a hill, in the sun, and have been walking all day but this hike had taken so much out of me already, I struggled on the ridge about halfway in (as I slowly realized we were still not there).

The ridgeline is a mix of a rock scramble and trail, some parts are dangerously close to the cliff’s edge and I literally refused to look left at some points as I didn’t want to know how long my drop was. I was practically hugging the rocks to the right.

Save some energy; the ridgeline is about another hour or more if you’re already tired. Every orange marker pole I told myself, this has to be the last one, and when it wasn’t, I wanted to die. I was in a bad mental space at this very dangerous point! I’m telling you this, so you’re prepared, I didn’t prep for this part of the hike. I thought after the forest I was done.

It’s a funny thing; your mental space can be so crucial when you’re up on a mountain. I think I would have been better off knowing I had further go.

Don’t ever think you’re almost there on a hike… always expect there to be more. Lesson learned.

I can’t describe the relief I felt when I saw that tiny red bathroom peep out from the hill.

You don’t see the hut until the last second so you never really know how close you’re getting.

The next morning I was okay to head down. Luckily, you get the hard part done first. The ridgeline was easy this time around, I’m heading downhill, and I didn’t have 17km under my belt for the day yet. We made it down in no time.

The forest scramble was almost more challenging coming down as slipping down is far easier than slipping up! You’ll need to be seriously confident in your monkey skills to get down this track.

The hike back through the valley, although flat, was again, scorching my skin. With little relief from the sun, I was getting crispy no matter how many layers of sunscreen I was slapping on.

The hike seemed never to end, and my legs were jello by the time I made it to the car. I immediately collapsed in our bed in the van, not even caring that I was one filthy human.

We took about 7 hours to make it up, and we made it back down in about 5.5 hours.

The estimates from DOC were pretty on point with how long the trek takes, and we double-timed it on the way back which is the only reason we made it back so quickly. That includes a 20-minute lunch break at Aspiring Hut too.

There were only eight of us in the hut on the day we hiked making it a quaint gathering.

There are 20 beds with simple mats and counter space in the kitchen, but no cooking supplies or fire.

We scattered around taking pictures, exchanging travel stories, and getting to bed early, around 9 pm. I can’t sleep in dorms, so I waited the hours out with my eyes closed and for the sun to rise.

When it finally did, it was spectacular, as one would expect. It’s the only way to see this area at sunset and sunrise—hike and stay in a hut. Despite it being difficult, I’m sort of addicted to these little mountain huts!

There was an avalanche in the distance, some cheeky keas flying around, and some insane oranges, pinks, and purples coming out of the sky.

Tips and Main Points for Hiking to French Ridge Hut

HIking the French Ridge Hut was nothing short of epic and I felt great after taking on the challenge (and even greater after showering, eating, and resting upon my return). I can’t recommend this hike enough! Just make sure you are prepared—mentally and physically. 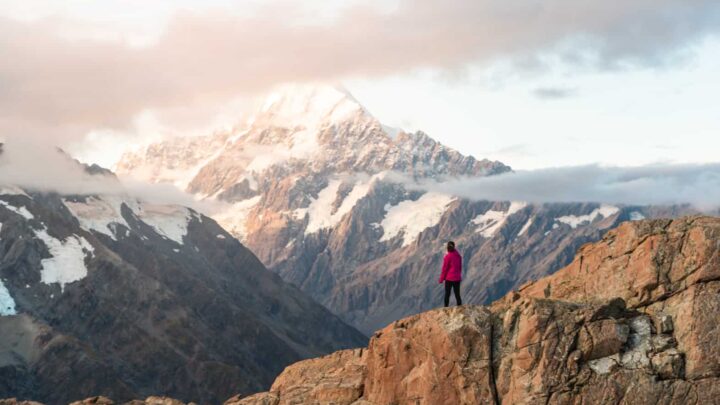 50+ of the Best Hikes in New Zealand & Hiking Tips 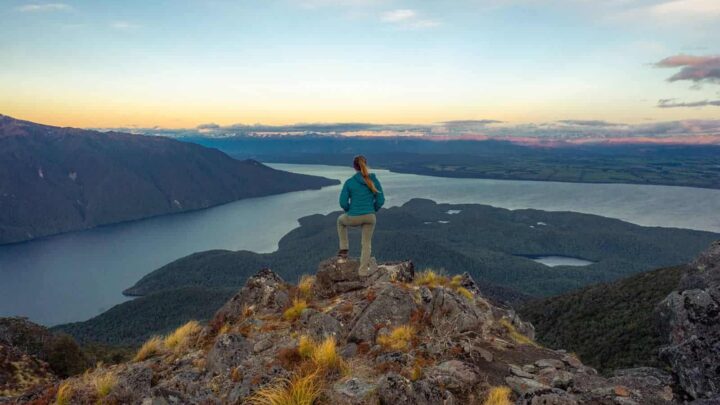 A Guide to Hiking The Kepler Track in Fiordland National Park, New Zealand 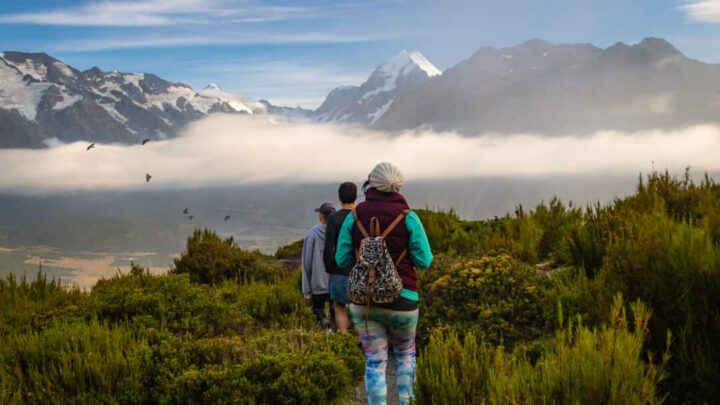 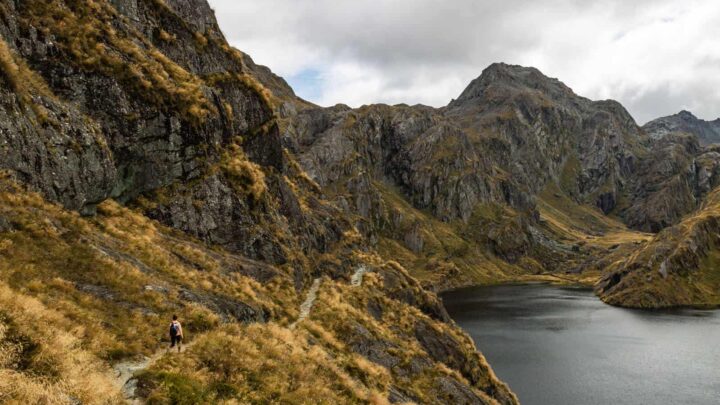 Guide to the Routeburn Track: Should You Do It as a Day Hike? (New Zealand) 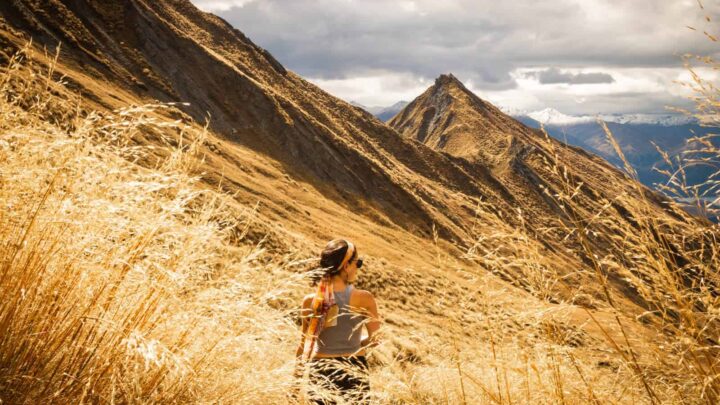 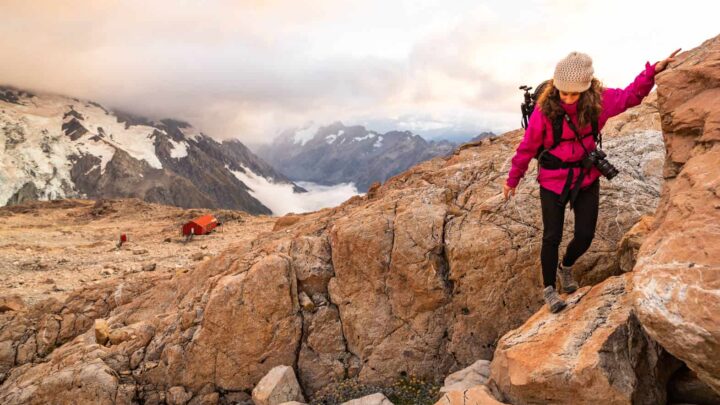 Would you hike to French Ridge Hut? Let us know in the comments!

>>> EVEN MORE ABOUT TRAVELING NEW ZEALAND <<<

A 5-Day Queenstown Itinerary For the Intrepid (New Zealand)

11 Fab Things to Do in The Coromandel, New Zealand

Epic Things to Do in Rotorua—Hot Pools & Adventures

7 Tips For The Cathedral Cove Walk in The Coromandel, New Zealand

5 Things to Know about Milford Sound, How to See It and Is It Worth It? (New Zealand)