If you picture yourself riding a camel through the desert with a turban on your head when you visit Morocco, your image is, well, a bit off kilter.

Yes, Morocco has hot desert regions that burn up to a high above 100 degrees Fahrenheit, but it also has snow on mountain ranges that soar into the horizon, Mediterranean beaches, and lush green foliage laden hills.

Morocco’s climate, just like its cities, towns, and villages, is extremely diverse. I wore a puffy jacket and a swimsuit in the same month while here!

Here’s what you need to know about when to visit Morocco and why Morocco in February, March, and April just may be the best time.

Best Time to Visit Morocco: What’s in a Season?

Yes, summer in Morocco can be stunningly beautiful, of course, but you’re also gonna come face to face with extreme heat. Even on the beach, where you’ll get some fresh breeze off the Atlantic or the Mediterranean, depending on your beach of choice, heat waves are still gonna strike, and North African heat waves are no joke.

During summer, yes, the days are longer, but in some areas, you don’t even want to go out during the day, and it can take a long time for the day to cool off as the sun sets so much later and could be glaring off the hot sand.

Also, everyone goes to Morocco in the summer, including returning Moroccans who work and live in Europe most of the year.

This means crowds, jam-packed hotels and streets, and overcrowded markets. You want to experience the culture, but not among every other tourist and a million returning expats. You’re gonna find limits to what you can do and when. Who wants that?

Likewise, the winter can drop to a dramatically cold temperature that’ll have you bundling up in blankets in a hotel room that doesn’t offer heat, and many don’t. In pretty much any area, beach mountain, or desert, you’ll feel the cold in your bones once the temp drops.

It’s the opposite of fun, like super lame, to visit a place where you plan to wander and explore, but you’re too cold to do any of that without a million layers. Not the best time to go to Morocco.

TIP: Here’s the jacket I use. It’s 3-in-1, a down and rain shell in one that can be used together or separately and will last for ages! I brought it to Morocco with me and it saved my life in the north during February!

That leaves you with fall and spring. Sure, fall is nice, but you’re heading into winter, which means that the days are going to get shorter and colder, and you are more likely to get hit with blasts of cold, or freezing, air than with cool spring breezes. Which leaves us with the best time to visit Morocco: spring.

You’ll get a mix of warm days and cool nights, you can travel to any part of the country, desert and mountain, without worrying about freezing or burning your butt cheeks off, and your layers can range from bathing suit to long sleeve shirts or light jacket. You don’t have to pack a parka “just in case.”

And, if you really want to ride that camel in the desert with a turban on your head, you can! You can do anything, go anywhere, and enjoy so much of the country if you plan to stay during these three months. No limits, no worries.

February can be considered the best time to go to Morocco by many because you might still get a chance to enjoy some snow activity in the Rif Mountains or the Mid Atlas or High Atlas mountain ranges.

The snow will likely still be capping the mountains, but you won’t freeze your traveling tush off during your visit—in most places. Obviously, if you plan to visit the snow, pack your snow gear.

February is also on the “when to visit Morocco” recommendation list for seasoned travelers because they know that many people haven’t started traveling yet.

You will get a much less crowded market to peruse or mountain range to explore in the months that aren’t actually even in full-blown spring yet. You’ll start to see flowers bloom, bud appearing cautiously on branches, but it’s a clear transition phase, Morocco in February is still waking up from winter.

My experience in Morocco in February

I was freezing my ass off in Chefcouene for a week. Cold to the bone, shivering, and under five blankets. It’s a wet cold, the worst kind. Get a heater in your hotel!

After Chefchoaune, I spent the rest of my February in Morocco along the coast in Taghazout. A much much warmer place to spend your time! There was a still a bit of a chill in the wind, at night, and when it was overcast but not cold and to the bone.

I wore my puffy jacket a lot and even had to bust out the raincoat in the north!

I would advise on not visiting the north of Morocco during February unless you’re totally prepped for it.

There are certain perks for visiting Morocco in winter though, we were just unprepared for becoming meat popsicles during our visit and this was literally the first place we went!

There was an unexpected amount of rain when I was there but it regularly doesn’t rain much in February. The water was quite chilly on the coast but I expected it since this was a wetsuit type of surf place!

Now we’re in full-blown springtime, yalla! People are frolicking in the desert because it’s nice and warm but it’s not too hot. Beach chairs and cabanas are set up along the Atlantic and Mediterranean for those early travelers (like you!) who have clued into the scoop that the country is not crazy crowded yet, but that it’s definitely in full-blown warm weather delight.

This is the time of year you will find all the beautiful greenery you never see in movies set in Morocco. Hollywood would have you believe this country is merely harsh desert, and nothing could be further from the truth.

Flowers will greet you along winding paths, fields of green can be found in lowland regions, and potted plants adorn walkways in ancient coastal cities. I spent some time in Imlil, a small village in the Atlas mountains, and it was nothing short of a lush, verdant, oasis, no desert in sight.

One thing to remember about spring in Morocco, and this applies to both February and March, is that you will have a touch of both winter and summer. Meaning layer up! You could have a nice warm day where you’re in a capped-sleeve dress with a light wrap and then find yourself super cold at night. It is the best time to go to Morocco, but the weather shift can get extreme.

My experience in Morocco in March

I spent most of my time in Morocco during March in Taghazout. While February had some rain, it was gone by March and the weather was pretty darn perfect!

As you near summer, April is obviously going to be the warmest of the three months. By now daylight savings will have struck; it landed on March 25 in 2018, so the days will be longer and warmer and the nights will be that beautiful warm weather feeling that’s got just a touch of breeze in the air.

You probably won’t need a jacket most of the time, but you can still wear one if you want to. This weather shift also means you will begin to find yourself surrounded by fellow travelers.

So, if you’ve been thinking about when to visit Morocco, and you’ve landed on April, book sooner rather than later especially around the festivals. You don’t want to fall in love with a hotel or hostel only to find that it’s already full, and in April, that can happen.

My experience in Morocco in April

April in Morocco was perfect! This month we had our road trip and drove all along the coast and down into the desert. Essentially most of the south of Morocco! The dessert was surprisingly perfect, I didn’t even sweat! And at night, I only needed a light sweater.

While in the mountains of Imlil, it was a bit chillier and there was still snow capping the mountains, but still great weather with the sun out warming you. Morocco in April has very tempered and comfortable weather all around. 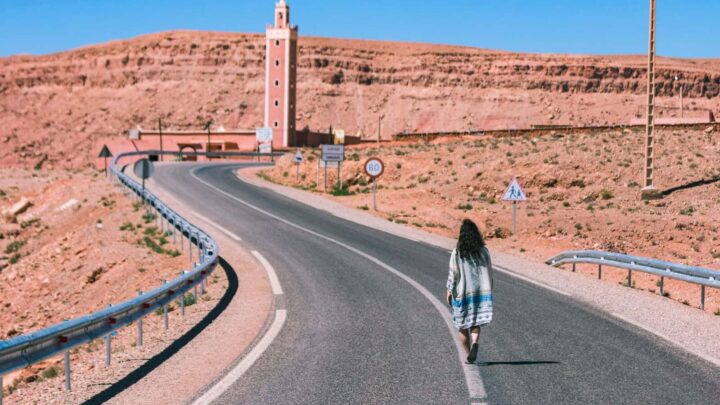 A Magical Morocco Itinerary for 1, 2, or 3 Weeks: Backpackers Guide 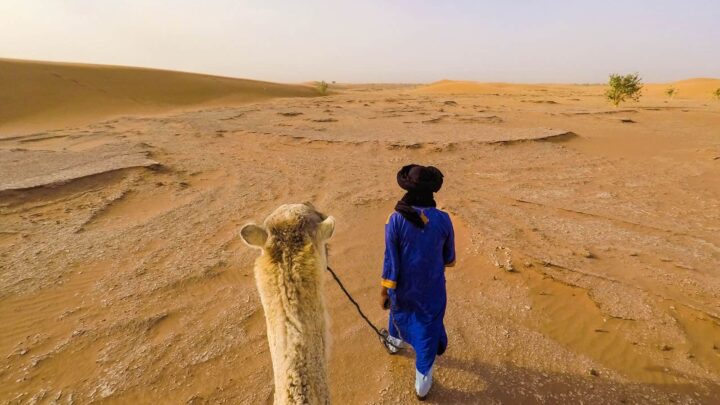 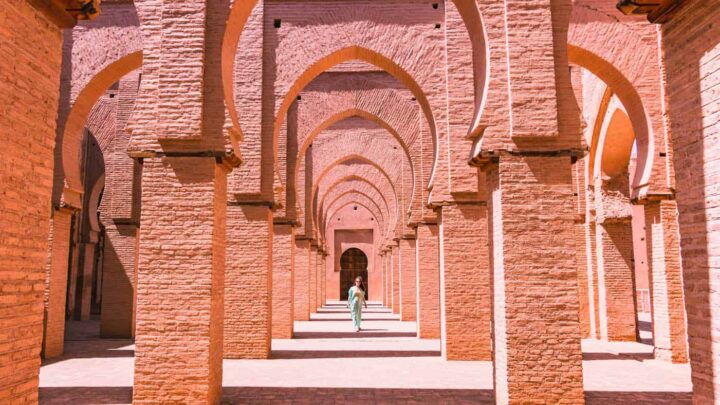 27 of the Most Photogenic Places to Visit in Morocco 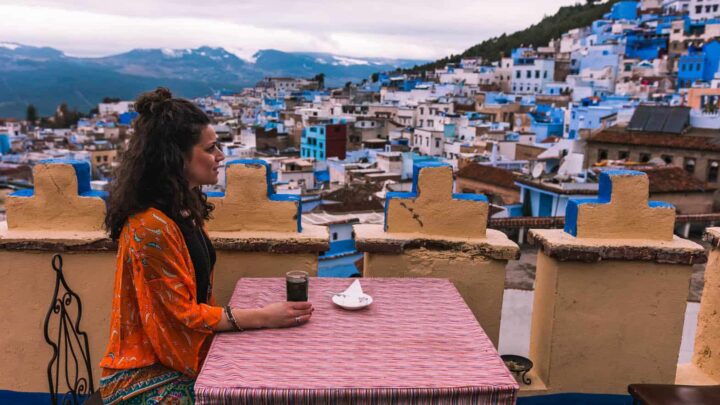 45 Essential Morocco Tips You Need for Your Trip 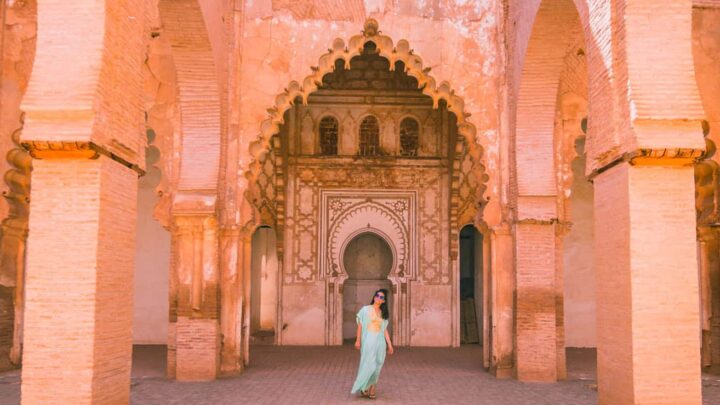 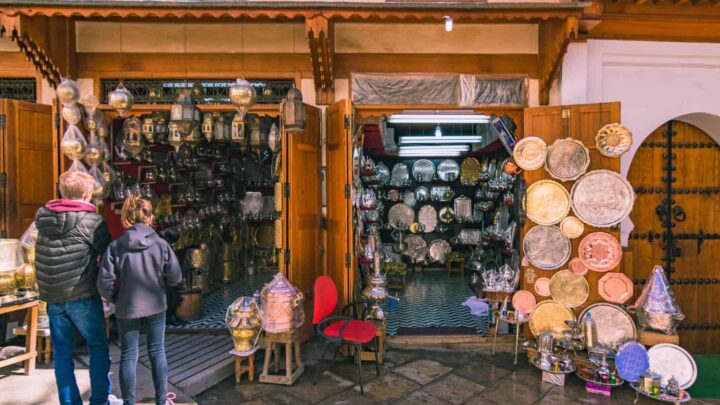 How Much Does It Cost to Travel Morocco

When are you planning to visit? Is spring the best time of year to visit Morocco for what you want to do and see here? Let me know your plans in the comments!

>>> Even More About Traveling Morocco <<<

9 of the Best Day Tours From Marrakech

25 Tips for Driving in Morocco & Why a Morocco Road Trip Is a MUST!

Finding Goats in Trees in Morocco: Yes, This is Real Life!

8 Things to Do in Ouarzazate: A Movie Buff’s Paradise in Morocco

How to Visit Paradise Valley Morocco: A Day Trip to an Oasis

What to Wear in Morocco Packing List: 13 Must-Have Items

What NOT to Miss on Your 5-Day Morocco Itinerary

Don’t lose this! Click the picture to pin it for later.