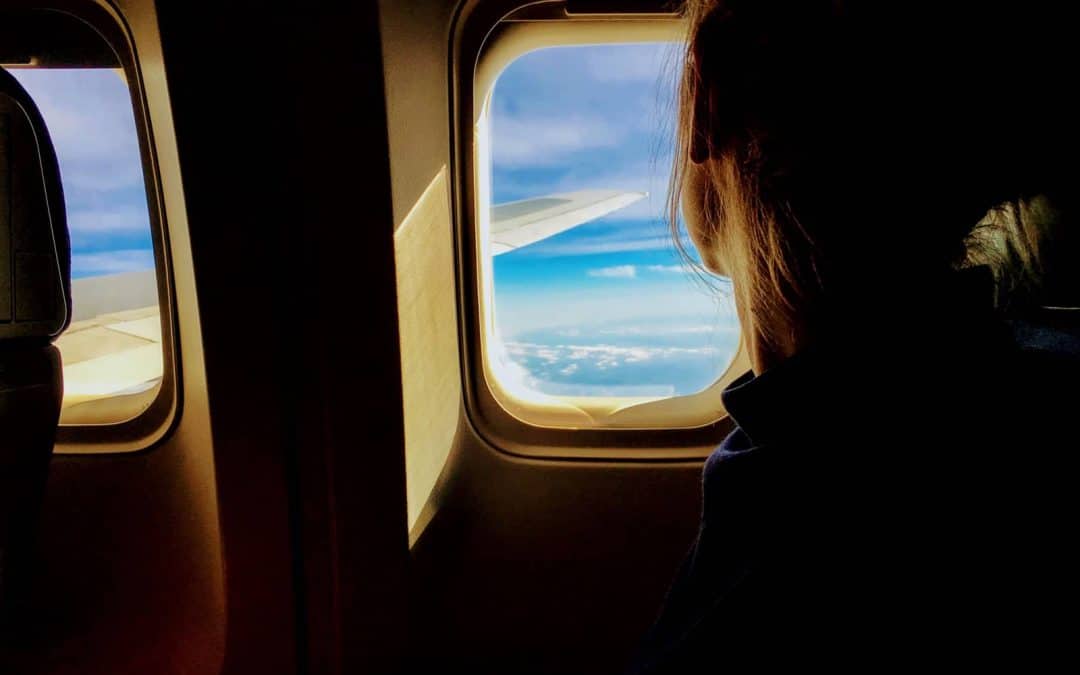 You pack your bags and are a “carry on only” traveler, can I get your autograph and get a picture with you? You’re like some elite celebrity now and I’m so envious of you!

Why is going carry on only a trendy thing? Why are those who check in bags looked down on? Why does it matter and why do people force themselves into being a “carry on only” traveler?

There are SO many downsides to going carry only. Which is exactly why I rarely ever do it.

Now, let’s set a few things straight here before people get angry because well, ya know, this is the internet and all, and it’s literally the easiest place to get butthurt about other people’s opinions…

Are all the easily butthurt people who can’t fathom that others have different opinions and like to have fun gone? Good, let’s get on with it… 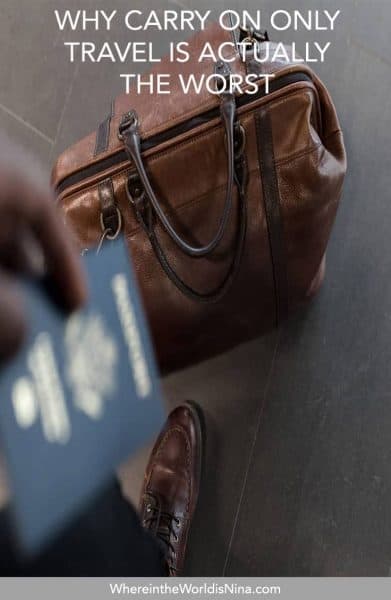 LOL, you think you’re going to be able to bring that puffy jacket, those hiking boots, and twelve sundresses because you’re going to Iceland, Norway, Thailand, and Hawai’i on the same trip?

That’s cute. Good luck having to wear twelve dresses under that puffy jacket to keep yourself warm enough, it ain’t happening.

Packing for two seasons in one carry on is not an easy task. Sure, it technically is possible because there are about 500 million celebrities and influential people on earth who have told us that ‘anything is possible” so we need to have faith, but do we really need to shove all that into a single bag? 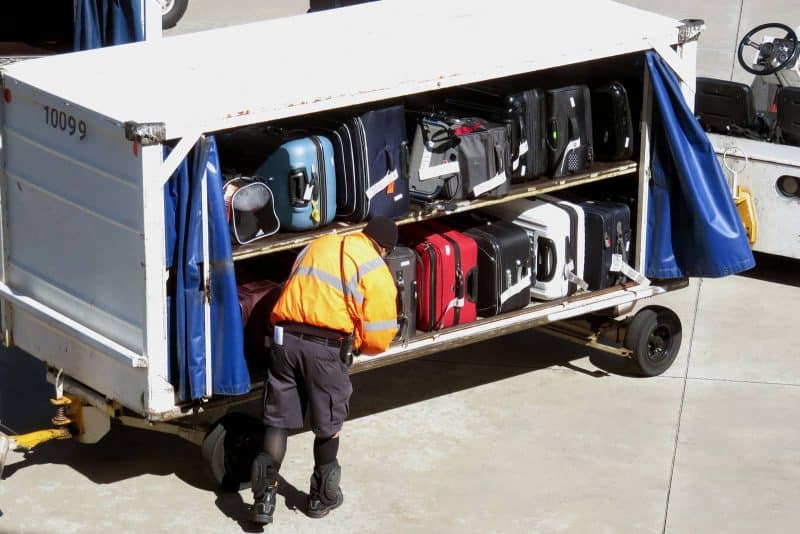 Totally fine checking in my bag, not the end of the world.

I mean, it’s not going to be easy, and you’re unlikely going to look cute. You’ll also hate yourself with all that weight on you, and you’re probably going to have to carry or wear that heavy jacket so it doesn’t take up all the space in the bag.

It’s not easy to pull this off, and it’s just not worth it in my eyes. Packing for numerous seasons well requires more space.

You’re going to stuff that carry on cabin bag so full and then put the overflow in your personal bag. Don’t pretend like you’re not.

Where else will you put your silly travel pillow, tablet, harmonica, large leatherbound journal, and ten intensive yoga and spiritual books!? You’re not going to have any leg room, at all.

In case it’s been a while for you on a plane, planes have already given you the least amount of leg room possible for a human to survive with. And that’s if you’re of average height!

If you’re a tall, leggy model (jealous), then you’re going to be smashed all because you wanted to go carry on only. I know, the legroom situation is borderline inhumane at this point but somehow the airlines are getting away with it. And if you’re on a long haul flight, good luck!

Made your personal bag too full? Booked an emergency exit row flight thinking you’ll score extra leg room for that bag? Ha! You’ll have to throw everything in the overhead bin or possibly place it in the hold if it’s all full. Speaking of…

Oops. They think your bag is too big or maybe you boarded too late (wait for it…)

You’ll have to put your bag in the hold anyway, so you can’t access your stuff, and you may even need to rearrange items so you’re not putting batteries or valuables in a place where you can’t see it.

Of course, this will all be last minute as they are closing the doors–so you’re frantically grabbing a few important things but being rushed caused you to forget your headphones which renders you unable to drown out the hellish screaming baby that will inevitably sit behind you.

You won’t get a warning for this either, you’ll be at the gate, or literally about to get on the plane… or worse, trying to shove your bag in the overhead space when they will break the news to you. 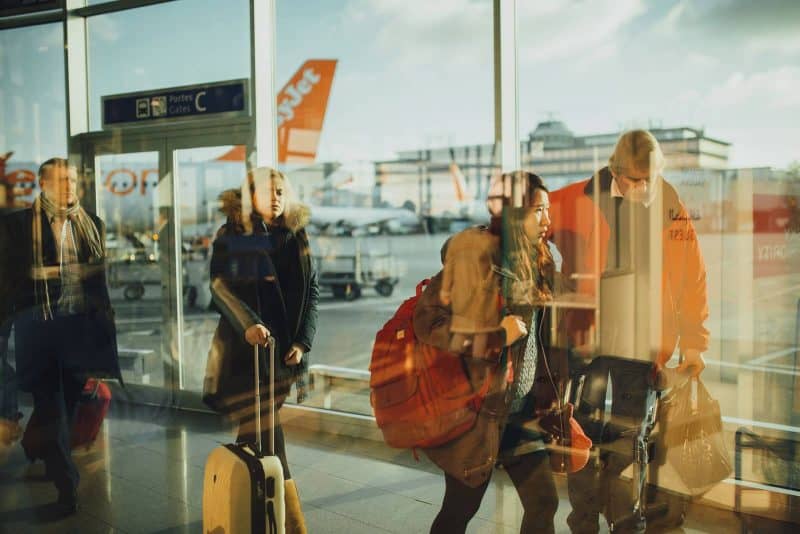 The hold is almost as bad as checking your stuff in.

You may have to pick your bag up where all the other peasants who checked their bags go or best case scenario, you’ll have to wait outside the plane on the tarmac for them to get it out of the hold while everyone else jets in front you making the immigration queue a million people longer.

So much for your master carry on luggage plan.

4. The Cabin Ran out of Space

Thought you were cool to board late so you could grab a sandwich and a coffee?

So either your bag will be approximately 20 rows behind you where you can’t see it, and you’ll need to wait for everyone to get off the plane to go the opposite way of traffic getting off or, best case scenario, it goes in the hold as I mentioned above.

5. Which Airlines? Which Carry on Limits?

What one airline deems as the oh-so-holy perfect sized cabin bag size doesn’t mean all the rest follow suit. Many airlines have different rules.

Some airlines say this size, some say that size, which size is it?! Oh, don’t worry, the weights are different too!

And which bag will you buy and bring with you for your trip? What if you have multiple flights across multiple airlines and they all have different rules?

Maybe some will make you check it anyway so now you need to buy another smaller bag to bring with you so you can carry on some items.

This is just a shit show, isn’t it? Why did you make this terrible choice? Wait, let me make you feel worse…

They will scream and yell… Maybe for your entire vacation.

One shoulder will ping, the other will ache, or they BOTH may totally tweak TF out on you. 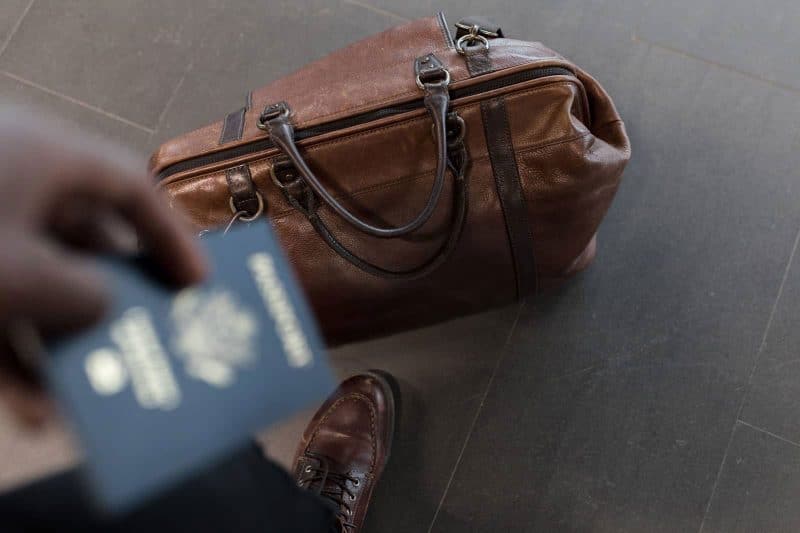 I laugh at duffel bag carry on people. It’s literally the worst bag to bring and your shoulder will hate you.

One shoulder will go numb while the other will get red. Your lower back is slightly thrown out from when you went to lift your bag and didn’t your use knees enough.

Your body hates you. Totally f*cking hates you. And really, you’re starting to agree with it.

READ MORE: The best carry on backpacks that won’t torture you.

7. WTF Are You Wearing Again?

Particularly for women, those outfits are going to get super old, super quick.

Are you wearing that blouse again? Isn’t it in every single photo already? Have you gone from Rome to Dubrovnik to Mostar in the same day? Because that’s what it looks like.

If you like to switch things up, going carry on only doesn’t offer the luxury of varying outfits.

Sorry, Mom, I can’t buy that cool teapot for you from Morocco because I decided to go carry on only, and that will put me overweight.

Also, my bag will break if I try to shove one more thing in it.

Oops, you wanted a cute new shirt from Venice, and a hand carved elephant souvenir from Thailand? Not happening.

You can’t buy not one thing on this trip, so forget it. I SAID FORGET IT, KAREN!

Aw, that’s cute, you have a fav lotion or fash wash and you want to bring it with you on your trip.

Not unless you tediously squeeze tiny bits of it into a 100ml tube so you can get it through security. Think you’ll just buy everything once you land? It’s totally possible! 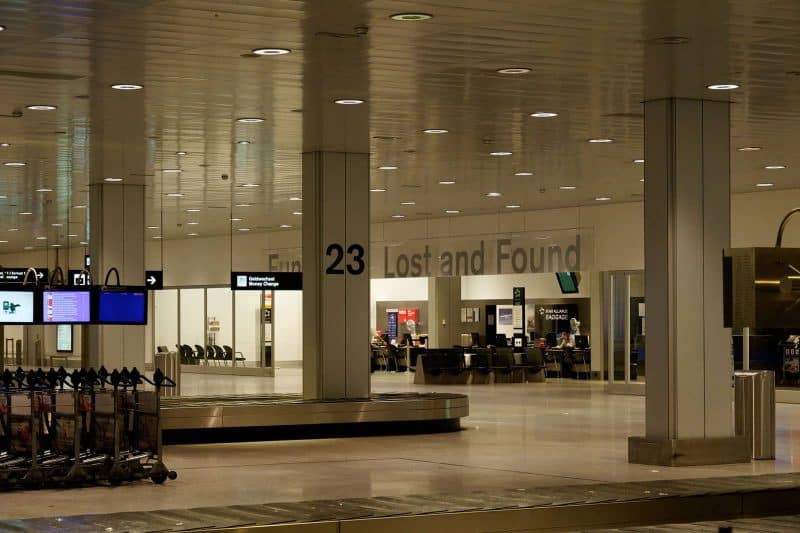 I’d rather wait here for my bag so I can bring what I want to bring.

A large number of toiletries and cosmetics have whitening agents in them in Asia. The sun is extra strong in New Zealand and you’ll have to give up your first born child to afford the sunscreen…

Many of these things are sitting at your home already or are cheaper back home. So too bad you’ll have to leave all those liquids behind!

Why do carry on only people think they are the shit?

Just in case any keyboard warriors are still here:

Remember guys, this was written to be silly and funny, no need to put me on a pitchfork and tell me all about recent amazing adventures with a carry on only… I don’t care to be belittled as if I don’t know what carry on travel is like, I’ve done it, I know, I’ve been there, I’m happy for anyone who travels the way they want to.

This was just to have a little fun! Nothing more, nothing less.

And because in reality, that lifestyle isn’t a possibility anymore for me as I literally live out of a bag and I have been for nearly eight years now. So when people give me shit and wonder why I’m not carry on only, I can show them this post instead. 🙂

I’d love to tell them, “How about you try living out of a carry on only bag for eight years and let me know how that goes for you. Don’t forget you work online and do photography too so that’s taking up a bunch of space already!” And see how they go…

Hope this made you chuckle and I hope this made #TeamCheckIn feel a bit better about not feeling pressured to shove everything they own into a tiny ity bity bag. Check it in… It’s OK!

Are you team carry on or check in? Tell us a horror story from either angle in the comments and make me laugh!

The Best 11 Carry on Backpacks For Every Traveler

DON’T Get Caught Without Proof of Onward Travel! Here’s What to Do… 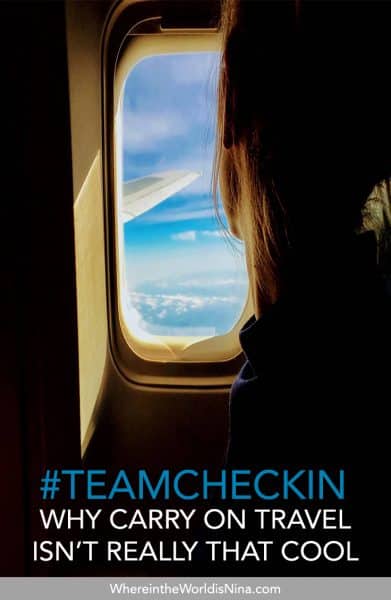 Here's my guide on what you can do NOW despite the world's current stateBONUS GUIDE: 7 THINGS TO DO TO TRAVEL LONGER!