So you’re about ready to go shopping in Southeast Asia

…and it’s a bit different from back home. What do you do? Well, one thing is for sure, don’t be a damn d-bag about it. It’s really easy to cross that line and wander into doucheland when you’re not sure how much things costs and your guard it up because you don’t want to get ripped off. Well, fear no more, here are some tips and points to keep in mind so you can shop like a pro. Here’s how to shop and bargain in Southeast Asia ….

– Do you see something you absolutely love? Have you seen it before? No? OK, get a great deal and buy it. Haven’t shopped around enough or you have seen it before? Then don’t buy it. Walk around, ask for prices, then go back to the cheapest person.

– Don’t start TOO low. Many people suggest starting real low, but starting too low can make you look like a d-bag, and be pretty rude. Don’t get all super cheap and start with an insulting price. I’d say about 40-50% less to start would be a good price point to start off at, but really it depends on the item. Use good judgment, you know when you’re being too cheeky!

– On the same note, it’s OK to not know how much something costs, you’re new around here. So how about asking a neutral party first? For example, if you have a friendly host at your guesthouse, ask how much that bag that everyone wears costs. Or if you see someone with that tank you like, ask how much they got it for. Get a good base price so you have some knowledge of the cost.

– Have a price point in mind. What are you willing to pay for this? This method has worked out great for me, I think of a price that I think is fair. I think it would be a good deal for the both of us. I say that’s all I’m willing to spend, and most of the time, I get that price.

– Continuing from the above point…If I still don’t get that price, I walk away. Smile, say no thank you, and walk away. 8 out of 10 come back and offer you another price.

– Don’t seem desperate for the item. They will sniff out desperation and be a tougher negotiator. 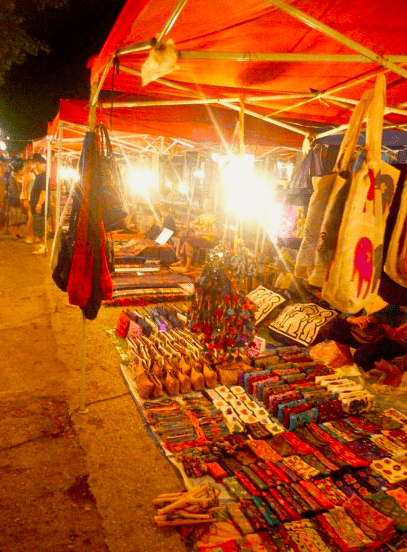 – Sometimes it’s worth being early as there is this unwritten common practice called the “first customer discount.” For some reason this is a way they barter with their first customers, you might get a cheaper price this way…You might not.

– Mentioning that you have found it cheaper elsewhere can sometimes work to your advantage. Just simply say, with a smile, “Ah, OK, thank you, but _X place_ said they can do _X price_.” They might match it.

– It’s OK to give in on that extra five cents. No, seriously, when you get down to the pennies (literally), the jig is up, dude. Stop being a d-bag and trying to whittle the price down by less than a few cents, you know they need it more than you, and even if they didn’t, is it really worth your time to get it down that much lower? Probably not. Also- kinda douchey… 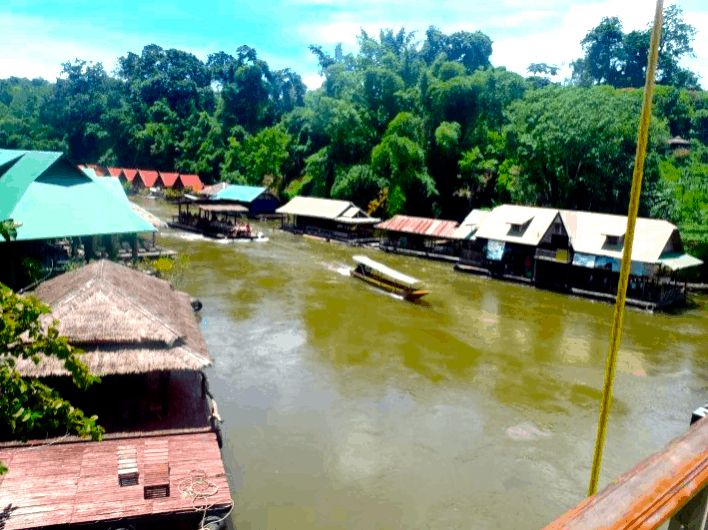 – The markets will be cheaper than the actual stores. The markets set up in the middle of the street, they don’t really pay for a storefront, so ultimately, they are cheaper.

– If the price is marked, that’s the price. I don’t use this rule is if I’m buying multiples of that item. I might ask for a bulk discount. Just judging by where I am and how expensive the price is, I might try and haggle a bit, but usually –  That’s the price. Personally, I think it’s cheeky and rude when there is a clear sign.

– Don’t bargain for food. I think that’s in bad taste. The food is what it costs. It’s rare to be ripped off by locals on food in the markets. If it’s too much, just get something else. *Extra tip: Don’t eat somewhere without prices. Also, ask if it’s not clear. They can give you an inflated bill, and by then it’s too late to do anything. 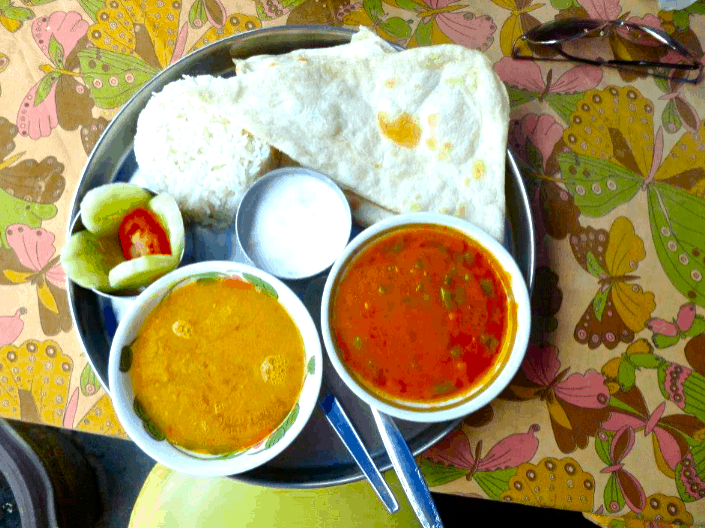 – If you know the local language enough to barter you will almost certainly get a lower price.

– Flippin smile! Yes, smile big, a lot, and all the way through the transaction. It goes a long way.

– Shop with a local. If you get this to happen, you can forget everything else I said. They should have you covered.

– I don’t know why this needs to be said, but it’s worth mentioning in my opinion… Put a damn shirt on. There are a plethora of tourists walking in the markets with a bikini top on or no top at all for the men. Why? Would you walk around a market at home shirtless? I’m completely baffled at those who walk in towns and markets shirtless. Unless you’re at the beach, PUT CLOTHES ON!

– There’s nothing wrong about being on a budget! Just don’t be rude. Get more great budget tips here. And here’s info on how much money you should bring to SE Asia.

So there you have it, how to shop and bargain in Southeast Asia –  WITHOUT being a d-bag! Don’t be that tourist…

Any other tips on how to shop and bargain in Southeast Asia? 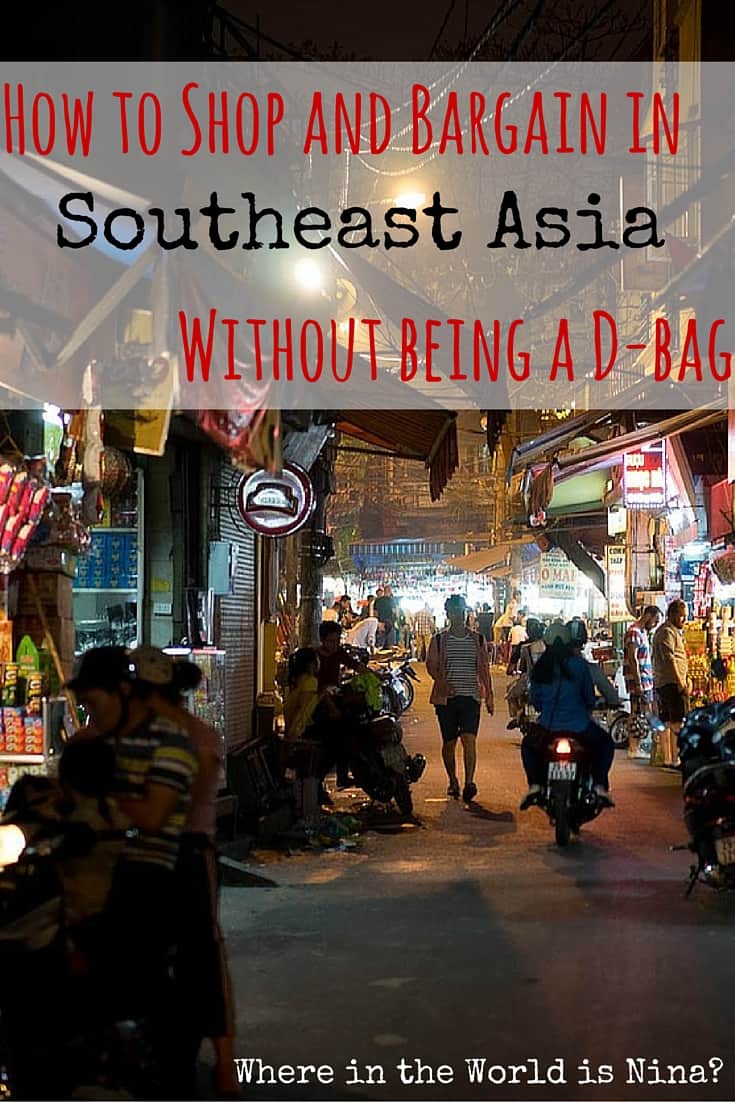 I love reading this! Grear idea tips too, I love Hongkong, Thailand and Malaysia for shopping never mind Singapore. lol

Great points. I alway think "what am willing to pay for that?" before I start bartering. And I agree... put a damn shirt on. How rude.

Thanks for commenting Kelly! I think its a fair way to evaluate a price! And yes, unfortunately saw it often.