An oxymoron, for sure, but it’s true. I freaking hate flying. I hate it, I hate it, and I wish I never had to take a flight eveerrrr again. *insert extreme pouty face and foot stomping the floor*

There’s just one problem… I’m addicting to traveling (duh) and it’s pretty much an inevitable experience if you want to travel (duh again).

It hasn’t always been like this. I actually didn’t mind flying. Funny enough, the more I travel the more I hate it. The process of airports and the flights themselves just SUCK! So I’m going to take a moment to bitch about flying for a bit.

I have a few airport/flight stories, lucky nothing too horrible… but enough to slowly wear away the fantasy feeling of “yay! I’m flying!” and instead being more like “omg, get me the fuck outta here!”

This is back in 2009 when I was visiting a small island in the Caribbean called Dominica. It was election weekend and there were hoards of cars and people in the streets advocating their side. My friend Robin was driving and we were in the middle of the political traffic bonanza going down the only road to get to the airport. At first it was fun to be in this line of cars and seeing them honk, hang out the window and yell for the red or the blue side. But then we started getting too delayed. I ended up at the airport with minutes to spare! Huzaaha!

Oh, what’s this? There’s a departure tax that I was unaware of and have spent all my money? You don’t take credit or debit cards? OH…AND YOUR ATM MACHINE ISNT ACCEPTING MY CARD?! FML. They let the flight go without me…and I had to catch it the next day. Which I almost missed that flight too because our car got stuck on a bunch of rocks as we were exploring. I surely wasn’t going to let my second last day go to waste. But I made my second flight. The new flight cost me $450. A very expensive mistake.

I arrived in Thailand for the first time only to learn that they lost my luggage. YES it ended up being a blessing in disguise because they delivered it to me in two days to a town an hour away from Bangkok! BUT the fact is, it started my first day out here on a bad note. That, and I also got sick, and ripped off.. and yeah, my first day in Thailand was a doozy, but anyway! Lost luggage is no fun.

I had a terrible experience with Ethiopian Airlines when I was flying to South Africa. I’m sure it was in the fine print, but who reads that stuff anyway? Apparently, since my plane had a layover, JUST A LAYOVER, in Ethiopia, I was supposed get a yellow fever vaccination. I rocked up the counter three hours early, thank goodness, and they wanted to see my yellow card showing I received this shot. I didn’t have it. To make a very long story short I had to run around the airport, through the express staff security lanes in the Suvarnabhumi airport (Bangkok) for hours. I was speaking to people in one area, then on the phone, then I had to go back to the front of the airport…blah blah. The end result: I had to get the shot otherwise I couldn’t board the plane. I got there, didn’t have the 500B needed for the shot because I spent all my baht, thinking I was leaving the country.

I’m crying at this point as I of course don’t want this terrible shot in me, plus it was supposed to be done two weeks ahead of time so it’s actually in your system. There was no point in getting the shot at all, for this stupid two hour layover! But I didn’t have much of a choice. I was flying out. I had to get charged out the butt to extract money off my credit card at an exchange place with crazy fees. I got the shot, they let me on the flight. I hated life on this day.

A layover in Mumbai = the smelliest layover of my life. It wreaked, the airport and my flight. The security was ridiculous, I had to go through tons of security lines, a bit annoying, but no biggy… Unless you have retarded people who don’t know how to wait in line and just push their way through, or better yet, a security guard yelling and pushing me to “Go! Go!” to continue walking up the security line, because obviously the lady in front of me wasn’t really there, and she was just a figment of my imagination. Just mind boggling. India is creeping a bit lower down my list of places to visit soon.

Shitting my pant was something I came close to doing on my short flight from Kuala Lumpur to Krabi at the end of 2013. From take-off my flight was terrible. Nothing against the airline or the staff… it was the weather. I wish there was some way to pause the weather when on a plane. It’s the worse feeling, especially when you are sitting in one the last rows of the plane. Luckily, I had a nice English woman next to me who was cool as a cucumber through a turbulent as fuck flight. She chatted with me as my nails dug into the arm rests with every dip that made my belly reach my throat. I sent my goodbyes to my loved ones in my head as I had visions of the plane being ripped apart by the stormy weather outside. Luckily it was only an hour long flight. It was the longest hour of my life.

A mix of a few other turbulent flights, ancient planes that still had ashtrays and one old TV at the front on a long international flight, or just being completely hung over with no sleep and having to be at the airport ALL make for terrible flight experiences. Oh, and the recent increase in missing planes and crashes that are happening in SE Asia right now… NOT COOL. 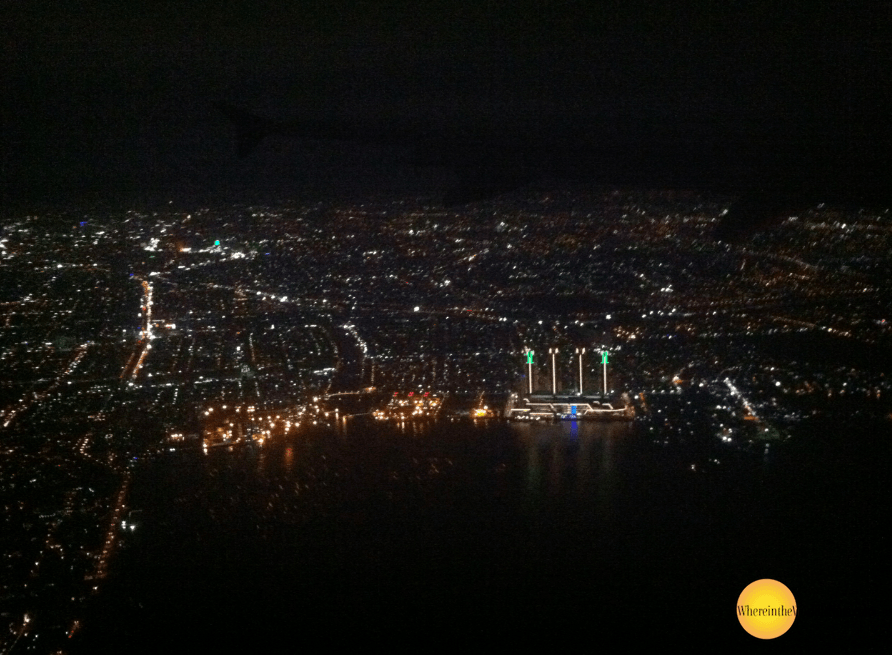 Oh, and I can’t forget being held hostage (totally exaggerating) at the Cebu Airport for not having an onward flight ticket.

I know, I’m being a baby. Whatever.

Anyway… The real question now is:

When is a teleportation device going to be invented already?!

*sigh* I guess I’ll just keep flying now… But I’m not going to like it!

Do you like flying? What’s been your worst experience flying?

The yellow fever thing is ridiculous! Especially since I've actually gotten the shot and traveled in countries with it and have never once been asked for proof.

I guess my worst experience was also here in SE Asia: in Siem Reap, Cambodia. Turns out that if you take 2 pictures with you, the filing of the visa is free (not the visa itself, which costs USD 20 if I'm not mistaken) but if you don't have the pictures, they charge you 2 USD for "scanning" your passport. I didn't mind the (stupid) fee because it was just 2 measly USD, but what got to me was that they are charging AND not giving out a receipt. Guess who they are reporting that income to? No one of course! Take 2 USD times the amount of people who go into the country every day... Basically, those motherf#%kers are making a living out of tourists. Anyway. I started arguing with them telling them that I wanted a receipt or I wanted my money back. They said that the receipt for the visa was my receipt also for the "scanning". I said: no, here it says 20 USD, not 22 USD. I want a receipt!

In short, both our tones escalated and the line behind me was getting longer. Hehe. All this BEFORE my visa was actually stamped in my passport. At this point even though I was still arguing with them I was thinking to myself: I just hope these bastards don't deport me because of this! :/

In the end I got my 2 dollars back, my visa stamped, and lots of pictures of Siem Reap the following couple of days. Hehehe

Other than that, I'm like a happy kid the moment I step into a airplane. I've had a couple rough flights due to weather conditions but I guess not as bad as the one you described above. Although I think it would be interesting... :P

Ah yes, it's totally the principle of the matter, nothing to do with money. I hate that! Oh well… Asia problems… :-p

Hahahaha. Flights can be a pain. I find them the best places to test your patience. The one thing I have trouble getting over is the reclining seats. I never do it but every once and a while it gets done to me and I may not know that person in front of me but I then realize there are less considerate people out there.